BuildAPKs has source code and scripts in order to build APKs (Android Package Kits) on Android handhelds, and similar. Quick setup instructions can be found here and also right here. To skip to installing in Amazon, Android, Arch Linux, Debian, Chromebook, Ubuntu and Windows on device in Termux you can use:

After installing, you can try building thousands of exciting, amazing and beautiful APKs by running shell scripts from this directory. It is simple! The minimal install size to start building your first apps is about 10MB. Have fun and enjoy compiling, hacking, modifying and running these select APKs!

Have you ever wanted to build your own application? Something that you can distribute over the Internet, and can be used on Android smartphones and tablets worldwide. Would you dare to try to spend some time learning something new to do so?

BuildAPKs is a project containing repositories of source code designed just for this purpose. Source code is the way programs are written in a human understandable language for applications to compile and then to be run on an Android device. These programs have been successfully built on device, a smartphone. First successful builds on Sun May 28 2017 in Termux (Android 6.0.1 aarch64).

Cloning and updating submodules is automated into the ` build*.bash ` scripts. To manually update this project to the newest version; See update.buildAPKs.sh for more information. If you recieve a history error message from git pull, the simplest solution is ` mv ~/buildAPKs ~/b0 ` and then reclone into the $HOME folder. See CHANGE.log for this git repository’s change history.

The ` ~/buildAPKs/sources/github ` and ` ~/buildAPKs/var ` directories can be symbolic links to external storage space to save native space on device. For example, a ` github/var ` directory can be created and each can be symlinked with ln -s. Prefix the build*.bash scripts with bash to run buildAPKs in external storage, i.e. $ bash buildFlashlights.bash. Build Android APKs on device (smartphone and tablet).

This command: ` for i in $(cat ~/buildAPKs/var/db/UNAMES) ; do ~/buildAPKs/build.github.bash $i ; done ` will attempt to build UNAMES, all known GitHub usernames.

While this command: ` for i in $(cat ~/buildAPKs/var/db/TNAMES) ; do ~/buildAPKs/scripts/bash/github/build.github.topics.bash $i ; done ` will attempt to build TNAMES, all known GitHub topics @GitHub.

Submit a pull request at db.BuildAPKs if you would like names added to these listings. The db.BuildAPKs README.md has more information about the new database buildAPKs uses.

Really Easily Build an Android APK on an Android Device (Smartphone and Tablet). 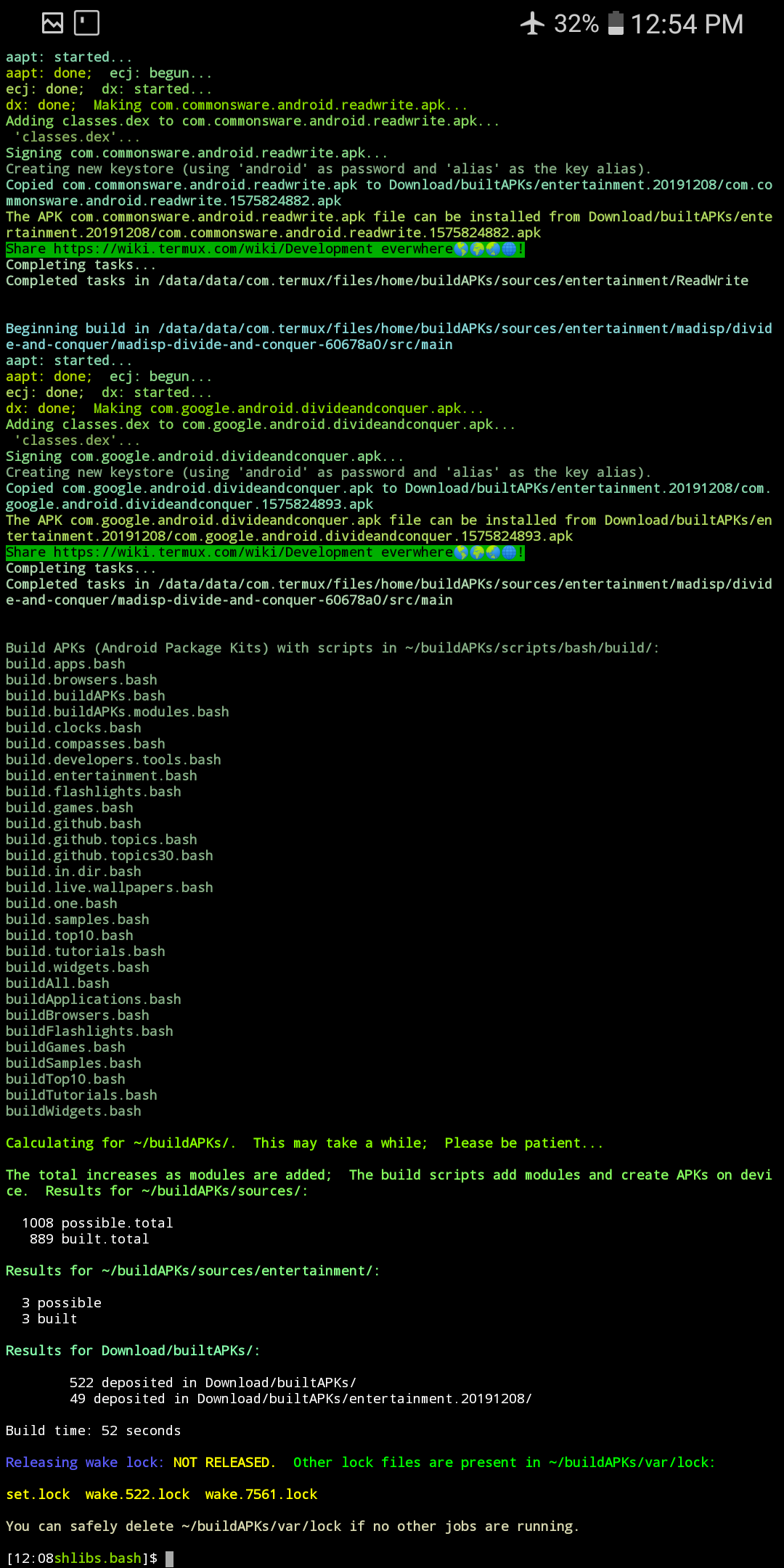 Prefix these bash scripts by typing dot slash ` ./ ` on your Android smartphone and tablet in Termux, i.e. type ` ./b ` at the prompt $, press TAB TAB (x2). The prompt will magically add uild. Then add a capital A. Press TAB TAB (x2) again. This will build the following command on the command line ./buildAll.bash for you. Press enter (return) in ` ~/buildAPKs/ `. Additional CLI information at The Linux Documentation Project.

The built APKs will be deposited into Download/builtAPKs if Termux storage permission is granted for installing on smartphone and tablet through browsers, and download and file managers. Built APKs will be deposited into ~/buildAPKs/cache/builtAPKs if storage permission is not granted. The minimal install size to start building your first applications is about 10MB. Have fun and enjoy compiling, hacking, modifying and running these select APKs on device!

The buildAll.bash command can build hundreds of APKs on your device. Maximum space allotment for complete build of everything included (755) is about 850MB for buildAPKs, plus about 74MB for the finished products deposited into Download/builtAPKs; More than seven hundred and fifty five (755) Android applications can be made from source code available at BuildAPKs on device today. With build.github.bash you can build nearly an unlimited number of APKs which are available at GitHub.

Contribute to this project through both the issues page and pull requests. Enjoy building these select APKs for Termux projects, and find the time to post your feelings here, and at this wiki.

If you are confused by this page try this link, and you might want to try this one.